AI, a new post category for this blog. I’ve gone back as far as November 2021 and retrospectively tagged relevant posts.

Modern ‘decor’ art, whatcha’ gonna do when the AIs do it better?

Google has unveiled its competitor to OpenAI’s DALL.E 2, albeit without any demo pictures involving people. But they say they won’t release it. Not even the code. Too dangerous, apparently. While leaves such things to the home-brew backroom boys, which I’d suggest is even more dangerous. 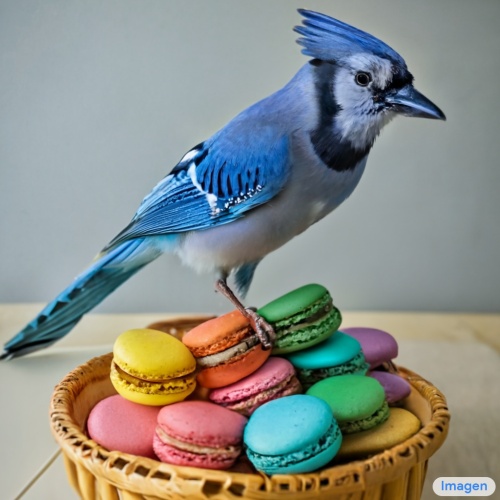 Some may argue that it’s too expensive for ‘backroom boys’ to train such AIs. Well, DALL.E 2 was said to be trained on just 10Gb of sources and the AI-training hardware and software is getting more efficient by the day. By orders of magnitude. It could be “home-brew” stuff in as little as a year. Someone is going to release this stuff, and it may as well be OpenAI and or Google, who have the heft to at least run some user education alongside it and establish some sort of uniform ‘ai-gen’ tagging of image-headers.

Clip Studio 10th Anniversary, including a futurology invite, with Clip Studio EX licences to be won…

Tell us all your expectations, wishes and prophecies for the next 10 years of Clip Studio Paint!

Inkscape 1.2 has been released. This free vector graphics drawing software adds the long-awaited multi-page support, alignment snapping, .SVG import from a range of open sources, performance and UI upgrades, and more. Should run on “Windows 7 and higher”.

Multi-page, among other things, moves Inkscape toward being more suitable for comics and storybooks. Hopefully we’ll start to see good templates for such.

Dynamic Auto Painter 7 is released. Some of the new features…

* Brush Size Adjust, in which it appears that brushes can automatically size themselves up when they detect big open areas such as sky. “This will prevent small brushes from being used on flat areas such as sky”.

* Video-capture of the painting process. Apparently video capture is a popular feature for YouTube-ers.

Mediachance’s separate AI Photo & Art Enhancer software has been trained to upscale painterly output from DAP, and can thus flank DAP as companion software. Sadly this new AI software is Windows 10 only.

But apparently DAP itself will still run on Windows 7 and 8, even in its new version. Price is the same too at $89 + local sales tax (which in some places can be as high as 20-25%). There’s no introductory discount but apparently the coupon code NEWYEAR2022 still works for now.

The Photoshop-friendly version of DAP called Photo Reactor + Photoshop plugin is in now in 1.9U beta (April 2020), and I’m guessing it may be next in line for attention. It’s not quite the same, as the UI and other things are necessarily different. But it’s sort-of the same in terms of the end result. It’s the better choice for those who want DAP in Photoshop and Photoshop Actions.

A large set of Fabric Folds PS Brushes, new on the DAZ Store. These are for Photoshop. You would have thought there would be a ton of similar free brush sets, but… no. Even I can’t find anything similar for free, after 30 minutes of looking.

What you don’t seem to get is the vital ‘subtle inner elbow crease’, that you can just dab in at a bend of a tight jacket. The set needs a volume two, I’d say: ‘Subtle Folds and Wrinkles in Tighter Clothing’.

There’s a GigaPixel 6.1 already (6.0 was only just released). The Topaz affiliate blog Plugs ‘N Pixels gives it a very impressive review, with special focus on what looks like an amazing…

Note that Plugs ‘N Pixels is working with a 4k scan, and upscaling from there. I’m guessing it may not work so well on a crop of an eBay picture at 1100px and 72 dpi. Still, impressive. 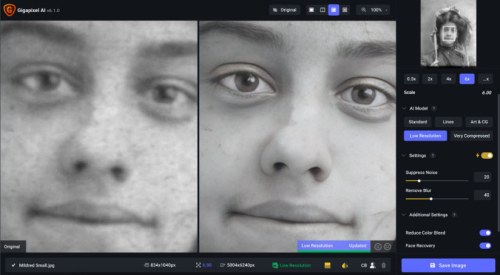 It uses the SwinIR method (de-grain and super-detail), which is freely available as 2021 code so expect this to turn up in other software soon.

Quite a few springtime bugs crept into the recent G’Mic 3.1.x, but the team have been stomping on them as fast as possible. The G’Mic .8BF plugin for Photoshop is now at v3.1.2.x.

Pre-ordering now, Wes Gardner’s (aka ‘Sixus1’ to the Poser / DAZ crowd) new Pakt book on the free painting software Krita. Judging by the strapline it’s focused on the more professional level of user, and will of course be for the latest Krita. Expect lots of pro workflow advice. 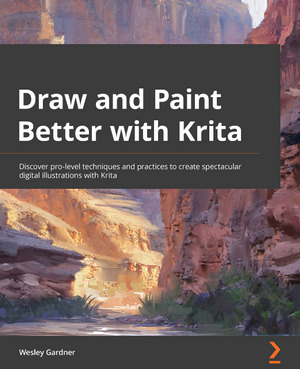 The new G’MIC 3.1 .8BF plugin for Photoshop is now available. New ‘trace edges’ filter, and an interface with a ‘generate a face’ service.

Please consider becoming my patron via Patreon. Many thanks!

Pages on this blog

About
PhotoLine: The Missing Guide
Will it run on Windows 7?

RSS feed for this blog.